There's a potato under there, truly there is! 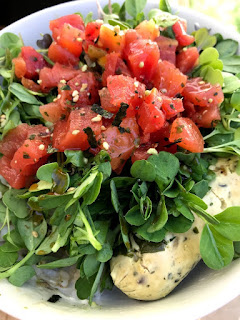 This is not about the recipe for these foods but what these foods have helped me accomplish in my goal to:
1. Not start on meds for diabetes
2. Lower my cholesterol meds and numbers
3. Increase energy levels
4. Lose a few extra pounds
5. Reduce inflammation in the body
Like many, I've been on a number of diets. The food lifestyle change was not just to lose weight, but to add more years to my life.
More than 20 years ago, I attended a 2-day seminar on reversing diabetes and heart disease by eating a plant-based diet. Because of this change, I have been able to keep diabetes and heart disease at bay for all those years. The most profound unofficial testing was that my mother died of complications from diabetes at the age of 58. Years later, both my younger brother (by 7 years) and my older brother (of 2 years) are both insulin-dependent diabetics. My brothers and I have the same biological parents, but they both continued to have the same diet of meat and animal products and I made some changes.
At first I had blood work to test where I was starting at. Escalated bad cholesterol was already running rapidly on the paternal side. Type II diabetes had already taken my maternal grandmother, also at the age of 58.
I started with no animal products, then gradually added back some of the meats to figure out what impacts they had on my labs. This was suggested by the doctors and dieticians who presented at the seminar. They did say, it would be best to do the diet for life, however they knew people would have problems sticking to it, so they suggested based on what level your health was at, to do the diet for 2 weeks, and then a month, and add more time. Then later, after I reached a healthier blood lab result, I could add back the animal products and see what impact it had on my cholesterol etc.
I found that after changing my lifestyle - I could eat fish but not much else. I also found that my cholesterol never really stayed down, but stabilized and wasn't going up. So, I stayed at this level of eating for about 20 years.
But then, in the past 5 years, my numbers went up and no matter what I did, following medical and nutritional advice, the numbers weren't going down and I was borderline diabetic for almost ten years. The difference was that I was preparing meals with oil and still eating fish and now, after being "scared straight" into not wanting to go on diabetic pills which has caused many negative side-effects to those who take it, I decided to do another deep dive into my eating habits. I refound some old cookbooks and videos on reversing diabetes and heart disease (again).
6 Months to Improved Lab Results
The first three months, strictly on the plant-based diet with no oil was challenging as I started in the beginning of September 2019. I retested in Dec 2019 and there was little to no change, although the numbers didn't go up, so that's good. I have to admit it was a bit disappointing. However, with much of what I had read and viewed online by Dr. Esseltyn and others, I was determined to see what the next three months could do and I pushed forward.
I found that if I go off of the truly plant-based, no oil diet - as prescribed in the book, "Reversing Heart Disease" - the weight creeps back on for me. Weight can sometimes mean an increase in bad labs so I have a concern about weight gain.
I retested again in Feb 2020 - my labs had remarkably lowered that even my doctor was impressed. I had lost about 10 pounds in the first 3 months and another 10 in the last 3 months. My cholesterol numbers had not been this low in ten years! I need to keep this up, so I never have to say I'm borderline diabetic. I also still want to reduce cholesterol pills and get off of them!
But then, March 2020 came and everything changed... The pandemic happened.
So you might be saying, what really changed? I started eating "snack" foods instead of making my foods like I did. I also moved from one state to another. Although I have been working remotely for a couple of years, the changes and the food options and not being able to freely travel was a bit crazy.
May 2020 - I gained 10 pounds of the 20 I lost. Still not bad for staying home for the past couple of months. I kept walking but not as much as before.
I can feel the difference with and without the weight. I also have a condition that causes pain in my joints and the external stress wasn't helping.
It's the end of May, I never left the plant-based, no oil eating, I just ate sugary snacks and processed non-meat foods. The processed foods were an option I used to eat, but I need to stay away and go back to my cookbooks. I also need to reduce processed candy and go to fruit if I feel the need to eat something sweet. Being at home somehow justified in my mind that I should buy bad food in order to help me cope with the world's crazy. That's gotta stop now.
Things I have to watch:
Adding salt via:
Shoyu
Furikake
Processed foods:
Soy Milk
Pasta including Saimin
Natto
Fake sausage / meats soy or other base
My favorite foods need to be whole foods not processed:
Jasmine Rice
Red and White potatoes
Okinawan Sweet Potatoes
Greens
Bok Choy 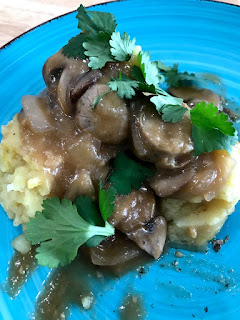 Blue plate special - homemade mash potatoes with mushroom gravy, yummo!
Every morning I enjoy home-cooked steel-cut oats with plant milk, and fresh fruit - Sprinkled with chia seeds, ground flax seeds, hemp hearts, and pumpkin seeds - hulled of course.
This breakfast can be made ahead of time. I cook 2 cups of steel-cut oats with 5 cups of liquid, you can use water or plant milk. I use a milk of both but usually just water. I then smash an extra ripe banana in while cooking it, along with dried cranberries and or golden raisins, and a splash of real vanilla extract, and ground cinnamon.
I use the long, 30-minute cooking variety as I like the texture better than the fast cooking steel-cut oats. Costco has a large bag of organic steel-cut oats.
After the oats are cooked, I let it cool, put it in a glass container and I have enough cooked oats to last about 5 breakfast meals. I top it with whatever fruit I have in the house, along with a tsp or so of chia seeds, ground flax seeds, and hemp seeds. 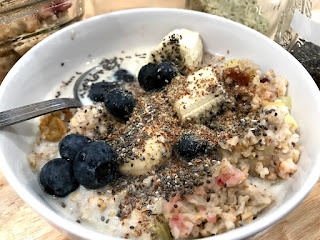 I like watching Jane and her mom Ann Esselstyn on preparing plant-based, oil-free, meals. Here's a video on the Plant Perfect Guidelines. This way of eating will help save your life if you are at risk for diabetes, heart disease, and a number of other issues. I've also found that eating this way has reduced the inflammation in my body.

Email ThisBlogThis!Share to TwitterShare to FacebookShare to Pinterest
Labels: Plant Based No Oil